The town of Skövde is situated in the south western part of Sweden between Vänern and Vättern, the two biggest lakes in the country. The region has a rich cultural heritage, and many historical tourist attractions.

In order to allow flexibility and maintain health consciousness in these uncertain times, we have decided to organise the DHM2020 Symposium so that it will be possible to attend the symposium either on-site in Skövde or online. More information about these two options, and dates regarding registration, can be seen on the “Pricing and registration” page. We hope that this arrangement will work fine, and we look forward to seeing you in Skövde or online.

How to get to Skövde

Skövde is around 1 hour away from Gothenburg center by train, or around two hours by car. Travelling to Skövde from Stockholm center takes around 2 hours by high-speed train.

Getting to Skövde by train is easy and convenient from both Stockholm and Gothenborg. However, if you arrive to Sweden in the evening, you may envounter difficulties catching a train the same night. Information about trains can be found at www.sj.se and www.mtrexpress.se. When arriving to Gothenborg airport (Landvetter) you will need to take a bus into Gotheborg city (www.flygbussarna.se) to be able to catch a train to Skövde. If you arrive through Arlanda (Stockholm airport) you can either take a bus to Stockholm train station or use the Arlanda express train. Taking a taxi from airport to train station is also an option but make sure you ask about the price before leaving as taxi prices are not regulated and price differences can be large. Buying train tickets in advance is highly recommended.

Arriving through Gothenborg Landvetter is the nearest Swedish international airport to Skövde. From the airport you need to take a bus (Flygbussarna: Airport coaches) to Gothenburg bus and train station (Nils Ericson Terminalen, last stop), followed by a train to Skövde. There are buses every 15 minutes and trips between the Gothenburg-Landvetter airport and Gothenburg Central Station take 30 minutes. The train from Göteborg central station to Skövde takes between 1 hour and 1.5 hours. There are trains every hour (approx.). Prices depend on the train, and change according to demand. Regional trains can be found for about 200 SEK.

Arriving through Stockholm Stockholm (Arlanda) is a bit further away than Gothenborg but can be quite convinient as a traveling option. From the airport you need to take either the Arlanda express (train) or a bus (Flygbussarna: Airport coaches) to Stockholm bus and train station. Then a train to Skövde. The train is faster and the bus is cheaper. The train from Stockholm central station to Skövde takes from 2 hours if traveling by the SJ X2000 or MTRExpress high speed trains, but can take up to 3.5 hours if using the SJ regional trains. Prices depend on the train, and change according to demand.

Multiple hotels are available in central Skövde, which is within 10 minutes walking distance to the ASSAR Industrial Innovation Arena and University of Skövde campus. There is an agreement between the University and the following hotels. We do not do registrations. In order to get a discount, specify that you are going to a conference at the University of Skövde. These three hotels are at a walking distance (less than 10 minutes from/to ASSAR Industrial Innovation Arena).

Skövde Vandrarhem, Address:Kaplansgatan 10 (very economic hostel; no breakfast but there is a breakfast restaurant in 5 min walking distance) Booking.com, Hotels.com and similar services can help you to locate further options

The conference will include lunch and two dinners. In addition a number of restaurants and pubs are available in the town center.

How to get to ASSAR Industrial Innovation Arena in Skövde

Will you be arriving by bus or train?

In which case, you have a five-minute walk to ASSAR from Skövde Travel Center. To get to ASSAR, the easiest way is to use the pedestrian underpass toward Boulognerskogen (the Boulogner Woods), passing SJ’s parking lot and then crossing Kavelbrovägen. Our address is: Kavelbrovägen 2B, 541 36 Skövde.

Opposite ASSAR’s premises, on the other side of Kavelbrovägen, there is SJ’s parking lot. Handicap-friendly parking is available outside ASSAR. 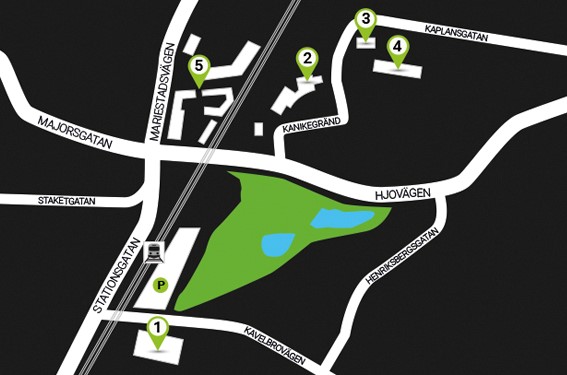